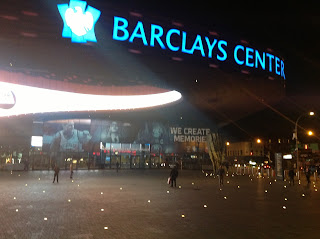 
Brooklyn, NY - The second Atlantic 10 semifinal of the day saw VCU facing Davidson. The perimeter prowess of the Wildcats in the face of VCU’s pressure served as an interesting contrast in styles with a trip to the conference championship game on the line.  From the outset, this was all VCU. The Rams led from the first minute en route to an impressive 76-54 victory, and will face Saint Joseph’s in the championship for the second time in three years.


First Half: The first four minutes were a perfect lead into the nature of the game. VCU got out to an 11-4 lead. The Rams pushed the ball, looked to penetrate, and were comfortable with the mid-range jumper. They came out aggressively, imposing their will on the defensive side of the ball. Davidson made some challenges, but VCU responded and closed the half with a double-digit cushion. Three-pointers were not falling like last night for the Wildcats. Credit the VCU defense. Coach Will Wade watched the entire Bonaventure-Davidson game in person and took careful note of Davidson’s perimeter threats. The Wildcats finished the half 3-of-12 from long distance.
Score: VCU 38, Davidson 25
Possessions: VCU 34, Davidson 33
Offensive efficiency: VCU 112, Davidson 76


Second Half: The first four minutes see VCU explode. The Rams win the first five possessions 13-5, and at the 16-minute mark, owned a 21-point lead. Three finishes in the paint and two three-pointers featured the versatility of VCU’s attack. In progress stats with just over 10 minutes left show Davidson shooting 4-of-19 from three. Again, credit VCU’s defense. VCU may be in a half court defense, yet they will pick up the point guard in the full court, a very good tactic to get the opposing guard out of a comfort zone as he attempts to initiate the offense. The second ten minutes fly by. Davidson cannot get a run of any sort together. VCU is in command, and headed to face Saint Joseph’s on Sunday.
Final: VCU 76, Davidson 54
Possessions: 63
Offensive efficiency: VCU 121, Davidson 86


What VCU did well: Present an offensive buffet. The Rams knocked down ten threes, shot 18-of-33 inside the arc and had a great turnover rate, all adding to an outstanding efficiency.


What Davidson did well: Care for the ball. Against a defense with relentless pressure, even in the half court, the Wildcats stayed under the 20 percent cutoff for turnover rate, no easy task facing this group.


NOTES: Bob McKillop’s Wildcats finish up at 20-12, with definite plans for postseason play. VCU improves to 24-9. Besides hitting the threes, VCU enjoyed a 30-26 edge on points in the paint. Korey Billbury paced VCU with seven rebounds. Peyton Aldridge and Nathan Ekwu both had seven each to lead Davidson. VCU scored first, 80 seconds into the game, and never trailed. The final four minutes of the game saw one field goal made, a layup by Andrew McAuliffe of Davidson with 15 seconds remaining.


Final thoughts:
“We guarded well, contested threes, and did a good job on the glass. Proud of our guys, they earned the chance to play tomorrow. We prepared very well. We planned well and played very well. I think we can play even better. Yesterday took us four or five minutes to assert our will. Today, we did so right from the start. We had a pretty big margin in the second half. We are versatile. They say we cannot hit a three, today we hit ten of them. The last month, we guarded and rebounded very well. We are all hands on deck. Whatever we need, we’ll find a way to make it happen. We have a very good strength and conditioning program. That is big this time of year. I appreciate our fan support. They travel and follow us. They like the fact that we are a blue-collar bunch, not the most talented, but we make up for it in other ways. Hopefully, we can give our fans a great moment tomorrow. St. Joe’s will be tough, they have two of the five best players in the league and they are all playing at a high level. We’ll reacquaint ourselves with St. Joe’s tonight, put together a game plan, and be ready at 12:30.” - VCU coach Will Wade


“We wanted to contain them. They have some very good shooters.” VCU’s JeQuan Lewis

“I told the guys after the game, ‘don’t take this for granted.’ We lost here and won, and there’s no worse feeling than going home with a loss.” VCU’s Mo Alie-Cox
Posted by Jaden Daly at 1:34 AM