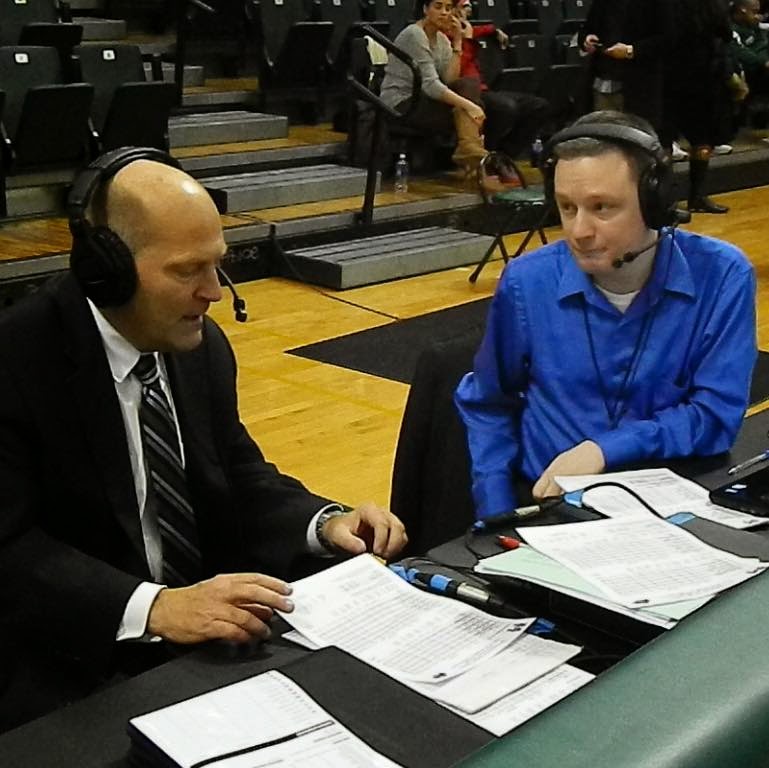 Jaden Daly, Founder and Managing Editor (@jadendaly)
The play-by-play voice of United States Merchant Marine Academy football on the USMMA Sports Network since 2011, and St. John's University baseball for two stints spanning parts of seven seasons, Jaden is a broadcaster who operates A Daly Dose Of Hoops when he is not on the air, and has gradually expanded the site's profile with each passing year, covering a grand total of 500 games since the 2012-13 season, including three NCAA Tournaments and two East Regional finals across five different sites. In March 2015, he was on the call as Manhattan College successfully defended its Metro Atlantic Athletic Conference championship, earning a second straight trip to the NCAA Tournament and fifth league title with a victory over archrival Iona.

A 2008 graduate of St. John's University, Jaden's first on-air experience came at WSJU Radio on the St. John's campus in Queens, where he was the station's sports director from 2007 to 2009, and also served as the lead play-by-play voice of men's and women's basketball as well as a fill-in baseball announcer whenever he was not the executive producer of WSJU's baseball broadcasts. In addition, he hosted his own sports talk show on WSJU during his tenure as a student. Jaden returned to his alma mater in 2010 to become the play-by-play voice of St. John's baseball, volleyball and lacrosse on RedStormSports.com, a position he held during the 2010 and 2011 seasons and returned to again in March of 2013. He also served as the play-by-play voice of St. Francis College athletics from 2010 to 2014 and Manhattan College basketball during the second half of the 2014-15 season, and has filled in behind the microphone for organizations such as Iona College, Wagner College and the Rockland Boulders of the Can-Am baseball league. 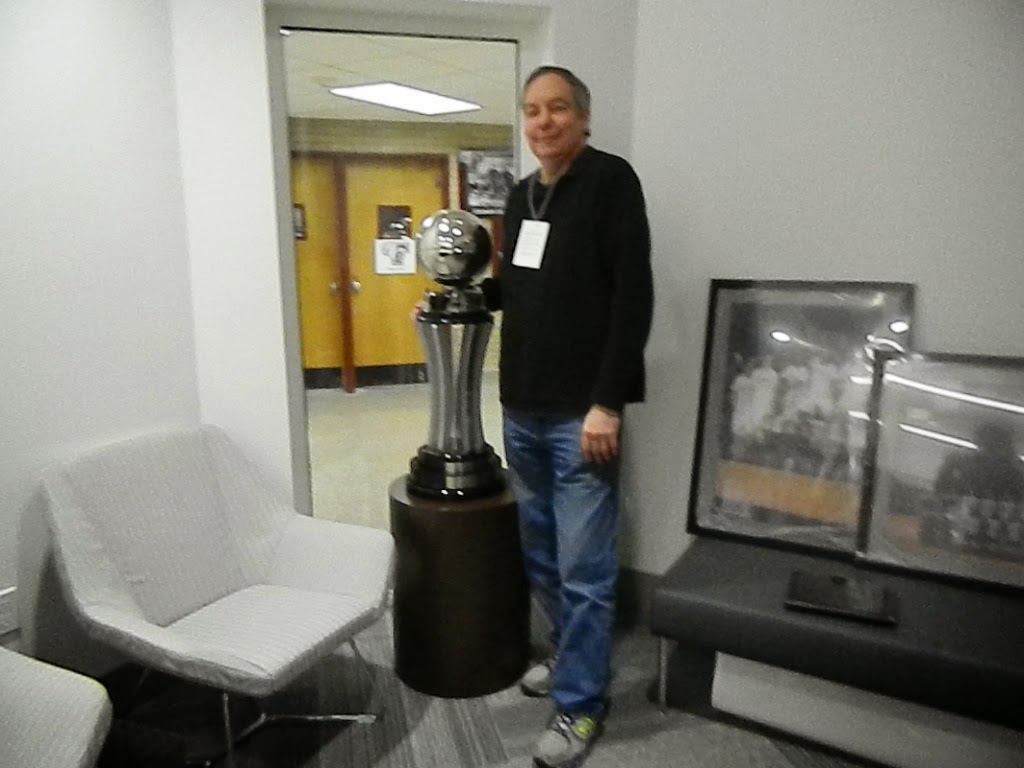 Ray Floriani, Senior Staff Writer and Staff Photographer (@rfloriani)
Ray made his Daly Dose Of Hoops debut in January of 2013, quickly becoming a fixture with his trademark photo essays, which capture the moments and atmosphere of every game unlike any other content on the site. He has since carved out his own niche to become the staff's primary women's basketball writer, and is always willing to further cultivate his love of the game by expressing it to his audience, all the while remaining in tune with the men's basketball landscape to present a dual perspective to his writing. Ray's coverage of the New York Liberty marked the first time in which this site had the honor of being affiliated with a professional sports franchise, and he continues to commit his spring and summer schedule to telling the story of the Big Apple's WNBA organization on a regular basis.

Often referred to as a college basketball "Renaissance man," Ray truly is the embodiment of such a person with his tireless freelance contributions to sites such as College Chalktalk, Hoopville, Swish Appeal, and many other reputable outlets as well, including an illustrious tenure with both Basketball Times and Eastern Basketball Magazine. He augments his writing throughout the year by also serving as a referee in his home state of New Jersey, where he has officiated thousands of games at various levels in several sports across the Garden State. Ray has also introduced tempo-free statistics to this site as an additional lens through which to study the game, something that had admittedly not been covered enough in the past, but is being chronicled much more frequently now as a complement to his exceptional photography.

Ray's lifetime of college basketball experience stretches across parts of five decades, starting at St. Bonaventure University in western New York, where he was the Bonnies' men's basketball student manager during his four years in Olean before graduating with a degree in history in 1974. Among the highlights of his basketball legacy include having covered every National Invitation Tournament to some extent since 1977, considering the event to be his favorite since the days of his youth, when he would shoot free throws in his driveway to simulate and reenact each matchup. Ray's fondness for the NIT was nationally recognized when the tournament named him its Media Man of the Year in 1999 and again in 2006 upon authoring the book entitled "The National Invitation Tournament," which encapsulates the historic memories and battles of the nation's oldest postseason tournament in his iconic photo essay format.

A well-traveled pillar of the Northeast basketball community, Ray lives in Lyndhurst, New Jersey with his wife, Karen.

Jason Guerette, Senior Staff Writer (@JPGuerette)
Jason officially joined the Daly Dose Of Hoops staff in December 2015, assisting in coverage of Seton Hall University, but was a contributor long before that, serving as the site's Seton Hall panelist for Big East roundtable previews while handling pregame and postgame analysis for South Orange Juice and New Jersey Newsroom. He is also a broadcaster by trade, serving as the voice of the Frontier League's Southern Illinois Miners, for whom he has been the Director of Radio Broadcasting and Media Relations since 2014.

A Seton Hall alumnus, Jason graduated in 2012, and during his undergraduate tenure, was a four-year staff member at WSOU, the award-winning student radio station on the Seton Hall campus. While at WSOU, he was the voice of the Pirates' men's and women's basketball, men's and women's soccer, and baseball programs, and was on the call for Seton Hall's 2011 Big East baseball championship victory. His exceptional career in South Orange was recognized soon after his departure, when Jason was honored as just the second-ever inductee into the WSOU Sports Hall of Fame.

During the basketball season, Jason also serves as the lead play-by-play voice of St. Francis Brooklyn women's basketball on NEC Front Row, and in March 2015, was on the call as the Terriers punched the school's first-ever ticket to the NCAA Tournament, winning the Northeast Conference championship over Robert Morris. He also handles the public address duties for all Seton Hall women's basketball home games, and select men's basketball contests. In addition, he has also served as the play-by-play announcer and media relations director for the East Texas Pump Jacks of the Texas Collegiate League, as well as the Northwest Indiana Oilmen of the Midwest Collegiate League. A man of many talents, Jason also spends time as a board operator at Westwood One, engineering a variety of national broadcasts.

A native of Jersey City, New Jersey, Jason still resides there for most of the year, but during the baseball season, his home base is the Miners' headquarters of Marion, Illinois.


Jonathan Reyes, Staff Writer (@werdynerdy)
Jonathan joined the Daly Dose Of Hoops staff in the fall of 2016, and will serve as the primary source of coverage for Wagner College and the Northeast Conference. In addition to his work on this site, he is also the editor-in-chief of his own website, The "J" Effect, as well as a columnist for TheGWW.com. His industry background is extensive, having served in the past as a breaking news intern at the Staten Island Advance and its website, SILive.com, and also as a sports intern at the Riverdale Press.

A 2016 graduate of Manhattan College, Jonathan holds a Bachelor of Arts degree in communications, with a concentration in journalism. During his time at the Riverdale institution, he wrote for Manhattan's student newspaper; The Quadrangle, beginning as a staff writer before ultimately assuming the positions of senior writer, assistant editor; and ultimately, sports editor. His work for the Quadrangle earned him Manhattan's Excellence in Journalism, Best Sports News Article, and Most Prolific awards, as well as nominations for eight similar awards in his four-year tenure. His in-depth profile on Steve Masiello, compiled in April 2016, still stands as one of the most comprehensive pieces written about the head coach since Masiello was hired by Manhattan in 2011.

Brandon Scalea, Staff Writer (@brandonscalea)
Brandon became a member of the Daly Dose Of Hoops family in the summer of 2016, and covers Rider University basketball as well as the Metro Atlantic Athletic Conference in general. On top of his work for this site, he is also the sports editor at The Rider News, Rider's student newspaper, and is a contributor to FlockU.com, where he writes about a variety of college sports.

An avid college football fan and New Jersey native, Brandon is currently a junior at Rider University, and will graduate in the spring of 2018.

Norman Rose, Staff Writer (@ECoastBias)
Norman joined the Daly Dose Of Hoops staff in the fall of 2015, serving as the site's contributor from the Capital Region in New York, where he covers Siena College and the University at Albany's men's basketball programs. In addition to his work on this site, Norman freelances on occasion for NYC Buckets, and is known throughout the local basketball scene as the editor-in-chief of Rumble in the Garden, SB Nation's site devoted to St. John's University.