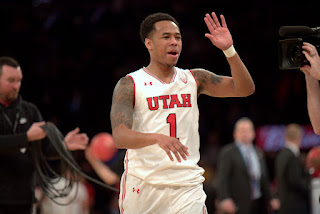 Utah's Justin Bibbins made right plays when it mattered most for Utes, who will play for NIT championship Thursday. (Photo by Bob Dea/Daly Dose of Hoops)

NEW YORK -- There were a few reminders of the meaning of the NIT. You hear a lot of talk regarding how the nation’s oldest postseason tournament used to be a big deal, and the like.

Granted, March Madness -- NCAA-style -- is the tournament very much in vogue these days. The NIT, though, is still respected and a championship  that is more than a consolation prize. A few cases in point:

About 40 minutes prior to game time, Western Kentucky Athletic Director Todd Stewart was chatting with ESPN’s Fran Fraschilla. Stewart then turned to a visitor and remarked, “I think this experience has been great for our program. If we go to the NCAA, we might be gone in a game. Here, we had three wins and play at Madison Square Garden with the hopes of winning a championship.”

Larry Krystkowiak, the coach of opposing Utah, shared a special moment with the media. The Utes’ mentor told how he recently received a good luck e-mail from Arnie Ferrin. A star of the 1947 Utah team that won the NIT, Ferrin was sending his well wishes to the Utes. The morning of the semifinal meeting with Western Kentucky, Krystkowiak quizzed his players on some NIT history, hoping to instill their appreciation for the opportunity to advance and compete for a championship.

“The NIT is something I really value,” the Utah coach said in a soft tone, not long after his group eliminated Western Kentucky in the first semifinal Tuesday night, 69-64.

The first game saw 13 lead changes and ties, and to no surprise for those watching, was decided in the final minute, a type of game both coaches will study ad infinitum, with the one coming up short agonizing over what happened against would could have been.

“Whether you are in the NCAA, NIT or whatever tournament this time of year,” Krystkowiak mused, “you hear about the little things.”

“Well, this time of year there are no little things. Failing to box out on a free throw things like that are magnified. They can keep a team from advancing and sending them home early.”

Utah was able to draw offensive fouls twice in the last three minutes, with one taken by point guard Justin Bibbins in the final minute all but sealing the deal. The game was tied at halftime, but Krystkowiak, the former NBA veteran and head coach, knew what needed fixing: Turnovers.

“We were down 15-2 in points off turnovers at the half. That had to improve,” he said. The final two quarters saw the Utes commit just five turnovers -- against eight the first half -- while allowing just two points on giveaways over those last twenty minutes.

For Western Kentucky, they built a double-digit lead on success beyond the arc, but head coach Rick Stansbury deemed it fool’s gold.

The percentages gradually caught up with the Hilltoppers. In the final minutes, in a cruel irony, they were victimized by the three. “A kid (Tyler Rawson) who was 1-of-6 hits a three,” Stansbury lamented. “Credit Utah, they made the plays the last few minutes. We didn’t.” 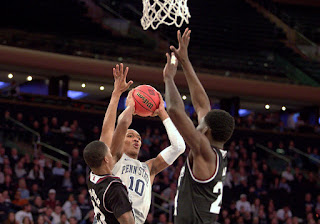 The nightcap was a definitive contrast to the first game watched, as Penn State, fueled by a 21-0 first half run, charged out to a 42-23 lead at the intermission behind an 8-of-13 display from distance. For all the talk about feeling it or the shooter’s stroke, the Nittany Lions simply had it. Mississippi State mentor Ben Howland paced the sideline, encouraging his team, yet there were times he could just stop in his tracks and watch bewildered as the Nittany Lions dialed long distance. The second half started off with much of the same, hot shooting by Penn State, negating any chance of Mississippi State making a serious run. Entering the fourth quarter, that 19-point edge at intermission grew to 24, as Penn State led, 65-41. Scoring on three straight possessions brought Mississippi State within 18 with eight minutes remaining. Following a timeout, Penn State scored on the ensuing possession. For the Bulldogs, the rally was ultimately too little too late.

The 75-60 final score did not accurately tell the story. Penn State dominated. The Nittany Lions had three in double figures, led by Tony Carr’s game-high 21 points and an 11-for-20 team effort from the three-point line. However, Penn State coach Pat Chambers focused on more than the hot outside shooting. The essence of this victory, in Chambers’ opinion, came down to the opposite end of the floor.

“We got rebounds and were able to push it,” he said. “Our guys were really receptive and prepared for a great SEC team. Mississippi State is a good basketball team. We watched them on film, but this was new for them. We were here before, playing in the Big Ten Tournament and playing here before that. You saw the benefits of that.”

Chambers again referred to defense as the key. “We held them to 11 and 12 the first two quarters,” he said. “I told our kids, ‘Take care of that end, and offense will take care of itself.’”