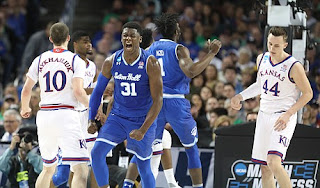 Angel Delgado saved his best for last, closing his Seton Hall career with 24 points and 23 rebounds in Pirates' narrow NCAA Tournament loss to Kansas. (Photo by the Lawrence Journal-World)

Two days after Seton Hall broke a 14-year dry spell between NCAA Tournament wins, the Pirates' season came to an abrupt end, but not before its four-man senior class provided one final observation of how it will be ultimately defined.

Trailing top-seed Kansas by as many as 13 points -- and again by eight with just 80 seconds to play -- with a spot in the Midwest Regional semifinals at stake, Seton Hall (22-12) dug deep in a hostile road environment, keeping the game alive on the strength of Angel Delgado's impressive performance on the boards and Khadeen Carrington's defiant last stand over the final minutes of regulation before falling four points short Saturday night, losing to the Jayhawks in an 83-79 epic that cemented the legacy of a quartet that returns to South Orange with pride and the realization that it left the last beats of its collective heart on the floor, refusing to cede on its own volition.

As Kansas moves on to face Auburn or Clemson in Omaha next weekend, Seton Hall now begins the process of graduating the core of Carrington, Delgado, Desi Rodriguez and Ismael Sanogo, and setting its sights toward what head coach Kevin Willard described as a bright future. We will do the same, offering a parting handful of takeaways -- from the home base in New York -- on the transpirings in Wichita:

1) No regrets, and a place in program history.
The late Vince Lombardi was known for several iconic philosophies during his career, which included a pair of Super Bowl victories, but none may ring more appropriate than the following:

"I firmly believe that any man's finest hour is that moment when he has worked his heart out in a good cause and lies exhausted on the field of battle -- victorious."

And so it is for Seton Hall and its seniors.

"I felt like my guys -- from the starting five to everybody on the bench -- gave their all," Sanogo, who was held scoreless after posting a double-double and serving as perhaps the most valuable player in Thursday's win over North Carolina State, reflected. "I couldn't ask for more than that."

"I think those who watched us play could say that we were tough-nosed, gritty kids," Carrington echoed after his final entry into the record books included 28 points, all but two of which coming in the second half. "We didn't take anything from anybody and we played hard, and that's what we tried to do from the time we stepped on campus. We tried to play for ourselves, for our coaches, our families, and for the name on the front of our jerseys."

"We left everything out on the floor at every single game," Sanogo said. "And that tradition is going to carry on for the rest of Seton Hall's legacy."

2) 20/20 Vision
Delgado's 24-point, 23-rebound game was only the fifth 20-20 game in NCAA Tournament history since 1973, and first since Tyler Zeller recorded 20 points and 22 rebounds in a regional semifinal win for North Carolina against Ohio University in 2012. Even more impressive was the fact that the 23 boards were third-most in a single game in the tournament, and the first time a player amassed 20 and 20 against a No. 1 seed since Hall of Famer Hakeem Olajuwon did it for Houston in 1983. Of the five to accomplish the feat, three -- Olajuwon, Joe Smith, and Tim Duncan -- went on to become No. 1 overall picks in the NBA Draft, which says even more about the company the 6-foot-10 potential All-America candidate has now joined after registering the 72nd double-double of his illustrious career, which could ultimately conclude with his No. 31 possibly headed to the rafters down the road.

"I thought he was obviously the best player in the game," Kansas head coach Bill Self imparted. "Carrington was pretty good, too, but he (Delgado) was a man, and we knew he was good. I think he's a terrific player. The thing that impresses me as much about him as anything (is that) he never forces it. He takes his time, and he's probably as good a passer (Delgado did have five assists) as he is a rebounder. He was great."

"Someone's going to be really happy with him next year," Willard assessed of Delgado and his professional prospects. "He's been doing that his whole career. He's just one of those guys that wins you games, and I think at the next level, that's a premium. He's not going to shoot the ball 30 times next year, but he's going to get the guy who does shoot 30 times four or five open looks, and that's something that's a premium."

3) One last charge from Mr. Clutch.
Over his four years in a Pirate uniform, it seemed as though Khadeen Carrington lived for the big stage and the big games, as the shooter-turned-point guard thrived on raising his game to another level in direct correlation to the stakes surrounding each respective contest. The first vestige of his clutch gene came in the 2016 Big East Tournament, when he -- and fellow Brooklynite Isaiah Whitehead -- launched their joint tour de force en route to the program's first conference championship in 23 years, then manifested itself on several occasions last season; particularly in his 41-point masterpiece against Creighton in a pivotal February game, and continued to reveal itself as a senior floor general. His last flurry of relentless pursuit came in the form of 13 consecutive points in just 54 seconds to rescue the Pirates from what looked like a dagger three-pointer from Svi Mykhailiuk that turned a five-point game into a more comfortable 71-63 lead for Kansas with 1:20 to play, beginning with a pair of free throws before a layup and two consecutive threes -- the latter a deep bomb that play-by-play announcer Brad Nessler remarked was hit "from Dodge City" -- brought Seton Hall within one possession. A final slashing layup followed before an off-balance three went in, but was disallowed as Myles Powell was called for a questionable illegal screen. All in all, the Bishop Loughlin product acquitted himself well over four years, especially as a senior proving critics wrong when cynicism arose over how well he would handle the change in position to point guard. He will be greatly missed, without question.

4) "I try not to think about what might have been..."
To paraphrase a 1990s country tune from Little Texas, Willard was asked by Zach Braziller of the New York Post whether he had any regrets about not doing more during the regular season to earn a lower seed, and offered a revelatory response, but not before delivering another playful zinger in the friendly back-and-forth slapstick routine between the two.

"There you go, Zach," Willard quipped. "Thataboy! Yes, that's the lesson I was trying to get through when we were having a little tough stretch in late January was understanding that a couple -- I think it was only two rough losses that we had -- were going to hurt our seeding. It's a lesson learned moving forward, and I think the next time we're in that situation, we'll make sure we won't make those mistakes."

5) Looking ahead to 2018-19:
Life without Seton Hall's seniors begins in earnest sooner rather than later, but the cupboard in South Orange will not necessarily be bare next season. Quincy McKnight, who sat out this season after transferring from Sacred Heart, will likely start in the backcourt alongside Myles Powell and can be counted on to be a combo guard that will ease the burden on Eron Gordon and Jordan Walker at the point. Taurean Thompson, who also sat out after leaving Syracuse, will likely be Sanogo and Michael Nzei's successor at the four, and will partner up with Sandro Mamukelashvili and 7-foot-1 Romaro Gill -- who redshirted this season -- on the front line, with Myles Cale the heir apparent to Rodriguez on the wing. The future is bright for Willard, and it could not have looked this promising without the legacy of the group that preceded next season's new wave, which also includes incoming freshmen Darnell Brodie, Anthony Nelson and Jared Rhoden.

"The legacy that I know they'll leave is the fact that the three guys I had sitting out, the young freshmen we had playing, the three or four guys we've got coming in next year, all understand what they need to do on an everyday basis to take the next step," Willard said, fighting back emotion in the process. "And that's going to be their greatest legacy, the fact that the consistency that they worked with, the consistency that they played on the floor, the consistency that we've won has given Seton Hall a very, very bright future. They won't understand it until they come back next year for a home game, and they'll be really excited about their legacy, because they'll watch it on the court."

Finally, on behalf of Jason Guerette, who has been an indispensable tag team partner on this site's Seton Hall coverage three years running, and myself, we thank you for making us a trusted source for following the Pirates, and it was our honor and privilege to help tell the story once again. Until next time, Onward Setonia.
Posted by Jaden Daly at 1:30 AM