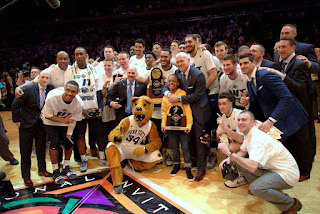 NEW YORK -- There is no need to convince those who realize the significance of the National Invitation Tournament.

The television deals may not be as lucrative, nor the ticket sales as brisk, but to more than a few purists, the nation’s oldest postseason tournament has its validation in place, signed and sealed.

There are reminders. Even if the date and score may be forgotten, the memory refuses to be erased. On Tuesday, Rick Stansbury was chatting casually about an hour prior to game time. His Western Kentucky team was facing Utah in the semifinals. Stansbury had previously been the head coach at Mississippi State, and a memory of eleven years back once again came into focus.

“It was right there,” Stansbury said, pointing to another end of the court. “We had John Beilein and West Virginia beat. Then after a timeout, they ran a play and got a step-back jumper in that corner to beat us at the buzzer. They went on to romp (over Clemson) in the championship.”

Don DeVoe, on the NIT selection committee for years, was a young coach at Virginia Tech. On a March Sunday afternoon, his guard, Bobby Stevens, became part of NIT lore. DeVoe once pointed out the exact spot Stevens’ corner jumper at the buzzer sealed a one-point win and championship over Notre Dame.

To remember such details, eleven years -- and in DeVoe’s case, over 35 years at the time -- proves how significant this tournament is. Getting to New York is a goal. Winning it all is truly an honor.

In the championship game, there was no last-second shot to store in the memory bank, as Penn State rolled to an 82-66 verdict over Utah. Leading by five at the half and getting a good challenge from Utah, the Nittany Lions thrilled their legions of adoring fans by outscoring the Utes 24-14 in the third quarter. Taking a 15-point lead into the final ten minutes, the Nittany Lions were not challenged.

“Our defense,” point guard Tony Carr -- whose 15 points and 14 assists were one rebound shy of a triple-double -- answered when questioned about the run. “You can’t go on a run if your defense is not working. Once our shots started falling, we got on the run.”

Defense meant contested shots. While the turnovers for Utah were not extreme, there were miscues forced by the Penn State defense that helped turn the tide.

“It was the turnovers,” the Utes’ Justin Bibbins admitted. “I had a few of them in that third quarter and they scored off them. It was turnovers.”

With the defense locked in, shots started to fall for the likes of Lamar Stevens, whose 28 points on 11-of-15 shooting cemented his most outstanding player honors to offset the disappointment of not being on the board on Selection Sunday.

“We proved Penn State basketball is here to stay,” head coach Pat Chambers said. “This is a springboard. Twenty-six wins, cutting down the nets, it increases ticket sales, creates excitement, helps recruiting. This is a validation of the staff and all the work they put in, and a validation of the players that took a risk to come here because they believed we were building something.”

All along, the mantra was New York.

“Whenever we might get tired during a drill or had a tough situation in a game,” Shep Garner said, “Coach would simply say ‘New York’ as a reminder of getting through the tough times and what we were working toward.”

While Larry Krystkowiak’s Utah team came up short on the scoreboard, that was not so in the experience of New York and the NIT.

“It’s the time of my life,” the Utes coach and NBA veteran said following the final. “I’ve always been on the outside, never been in the final four of the NIT, but talked to coaches who were here. I actually talked to a coach -- won’t say his name -- who actually went to a NCAA Final Four, and went to the NIT one year and won it. Of all his experiences, he said the NIT was the best experience.”

“Looking from outside-in, you’re always kind of watching the NIT and think of it as a consolation prize, but man, when you are in the middle as a competitor or a coach, you’re winning games and in the Garden and some of the tradition around here. People may be writing articles, but they have no idea how cool this was for us.”

In a moment to reflect on the significance of the tournament and its respected place in the college game, it is hard to find a team advancing to New York not thinking along the same lines as Chambers and Krystkowiak. In fact, it just may be impossible.
Posted by Jaden Daly at 2:05 AM