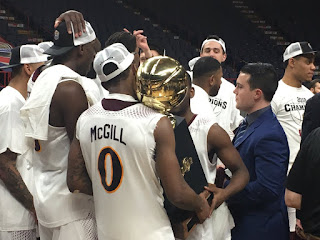 Rickey McGill holds MAAC championship trophy as Iona survived chaos around them in bracket to come away with third straight conference title. (Photo by Jaden Daly/Daly Dose Of Hoops)

ALBANY, NY -- Tim Cluess beamed with pride after Iona survived an unusually chaotic MAAC Tournament, remaining within the eye of the hurricane while it wreaked havoc on each of the top three seeds in the quarterfinal round, then cleaning up the damage with victories over Manhattan, Saint Peter's and Fairfield to earn the title of conference representative in the NCAA Tournament for the eleventh time in program history, more than double any other school in the league, with one for good measure.

"I didn't know -- at one point, we were 1-4 to start the year -- if we were going to get two wins," Iona's head coach reflected in the wake of his latest success story, an 83-71 victory for his fourth MAAC championship in New Rochelle and fifth trip to the field of 68, which also extended the program's streak of 20-win seasons to nine -- each of Cluess' eight seasons and Kevin Willard's last in 2009-10 -- with the opportunity to add to that total in less than two weeks. "And it wasn't because of talent. It was because of attention to detail and caring and passion and hard work, and all of the things you need to do to be successful. As we won a couple, lost a couple, I just didn't think guys were buying into the work ethic that I think it takes to be champions."

People can knock Cluess all they want for his history of welcoming kids with checkered pasts that obscure their obvious talent, for the perceived notion that he eschews defense in favor of a run-and-gun style, and they are only misleading themselves by doing so. The sheer fact is that his style, which encompasses offense, defense, and a unique -- but effective -- method of player development, is a proven winner at any level because of his commitment. Far too often in this culture of instant gratification, the simple concept of outworking the competition gets overlooked for opportunities to be artificially created stars elsewhere. Cluess is a rare bird in today's basketball landscape, one who sits with his players and helps foster a total package that ends up to the betterment of both player and team, and it is the biggest reason why he has won as often as he has. Take this year's Iona team as an example.

Zach Lewis came into Iona with a reputation for being a self-centered player during his time at Canisius and UMass, yet much like Jon Severe one year prior, sacrificed for the good of the program and was rewarded with a tournament MVP run to end a season in which he will walk away having developed further in one year than he had before arriving in Cluess' locker room.

"One thing Coach always told us is basketball is the purest thing we have," Lewis remarked. "If you work hard, you're going to get something out of it. Coach told me, 'You're going to come in here, and you're going to work hard.' That's what really attracted me to this school."

"Zach Lewis has got a scorer's mentality, and he's come in with one," said Cluess. "And I think our biggest adjustment for Zach was good shot, bad shot, what it takes to win. I saw a passing ability in Zach that I didn't think he was using a lot in his career, and so we asked him to be a facilitator as well as a scorer. The adjustment wasn't easy for him -- and I know that -- but I really appreciate the fact that he worked that hard at it, and he started to enjoy getting assists. It was great when he came back from being sick and just realized, 'I'm gonna do whatever it takes to win,' and that's all he cared about. 'All I want to do is win.' That's why he came here. How can you argue with a player like that?"

"You look at Roland (Griffin), I think he has so much potential in his game. He played two half-seasons -- half a year as a freshman and half a year in JUCO. He hasn't even tapped into his potential yet. I think we believe in him more than he believes in himself at times, but boy, did he believe in himself tonight. I can't wait to have him for a summer of development, because I can only imagine where he can be a year from now when he continues to work on his guard skills and his shooting skills, and plays with that type of confidence and leadership that we're expecting for him going forward."

It was this commitment, the willingness to be unafraid to improve, that propelled Iona to where they presently stand, and the significance of his players' labor was not lost on Cluess when the long-awaited payoff finally did arrive.