Masiello Placed On Leave By Manhattan 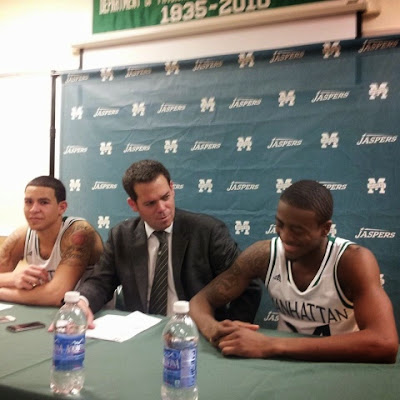 Steve Masiello, shown here amid much calmer times with Michael Alvarado and George Beamon, has been placed on leave by Manhattan in wake of fallout surrounding false resume that cost him the job at South Florida. (Photo courtesy of Jaden Daly)

Manhattan College has broken its silence in the matter of Steve Masiello, placing the 36-year-old head coach on leave while he reviews his coursework at the University of Kentucky, where Masiello played as a walk-on from 1996-2000 and won a national championship in 1998.

Masiello made headlines after it was discovered that he did not graduate from Kentucky despite indicating such on his resume, a discrepancy that cost him the head coaching job at the University of South Florida that he appeared to have all but secured just 24 hours ago.

"As a result of a background check commissioned by the University of South Florida, Manhattan College has learned there is a question of the validity of head men’s basketball coach Steve Masiello’s undergraduate degree from the University of Kentucky.

Masiello was named Manhattan College’s head men’s basketball coach in April 2011. Prior to that, he was an assistant coach at the University of Louisville from 2005-11. Masiello was an assistant coach at Manhattan College from 2001-05 and began his coaching career at Tulane University in 2000-01. He played four years of basketball at Kentucky from 1996-2000.

We ask all parties to respect the privacy of our student athletes until this matter is resolved.

Manhattan College will issue further comment as soon as this expedited process is complete."

In three years at the helm of the Jaspers, Masiello is 60-39, and is only five days removed from his first NCAA Tournament appearance as a head coach, one in which Manhattan battled Louisville and Masiello's mentor Rick Pitino before ultimately suffering a 71-64 setback.

A Daly Dose Of Hoops will continue to monitor all facets of this situation, and will report further details as they emerge.
Posted by Jaden Daly at 5:08 PM