St. John's vs. Georgetown: An act of sportsmanship 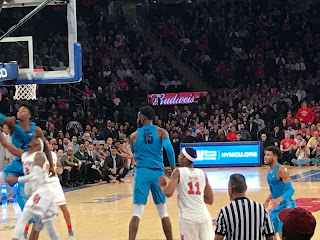 Georgetown's Jonathan Mulmore (No. 2 in blue) drives over Shamorie Ponds of St. John's late in second half during Hoyas' 69-66 victory over Red Storm Tuesday. (Photo by Andy Lipton/Daly Dose Of Hoops)

By Andy Lipton
Special To Daly Dose Of Hoops

NEW YORK -- In the early to mid-1980s, the Georgetown Hoyas were one of the best basketball teams in the country, led by one of the greatest centers of his generation, Patrick Ewing. They won one NCAA championship and made it to two other championship games, but no one was rushing to ask the Hoyas to do public service announcements on the topic of sportsmanship. It was the days of Hoya Paranoia.

Back then, to put it mildly, the St. John’s-Georgetown rivalry was fierce with no love lost. St. John’s was led by Chris Mullin, who won the John Wooden Player of the Year Award for the 1984-85 season. For that same season, Ewing was named the Naismith Player of the Year. Georgetown was coached by John Thompson, St. John’s by Lou Carnesecca. Carnesecca and Thompson each won multiple Coach of the Year awards during those years.

Now over thirty years later, Mullin and Ewing; both coaching at their alma maters, faced each again at Madison Square Garden this past Tuesday evening on January 9, 2018. After the game, Ewing, sentimentally referred to it as a dream come true. And after the game, as Mullin and Ewing posed for a picture for me, Detroit Pistons head coach Stan Van Gundy; for whom Ewing once worked as an assistant coach with the Orlando Magic, standing close by said that if this was 1985, the picture would be
fiction.

In a close game that went down to the wire, Georgetown defeated St. John’s 69-66. One lasting impression occurred with about five-and-a-half minutes left in the game. St. John’s guard Shamorie Ponds drove to the hoop, and went down hard to the floor. There was no foul called on Ponds’ drive. One of his teammates reached out a hand to help lift him up, and another hand reached out to Ponds' other hand. That other hand belonged to Georgetown starting guard, 6-foot-4 senior Jonathan Mulmore. To me, it was an act of strength, strength of character.

After the game, I spoke to Mulmore. Mulmore made it clear that he competes and plays hard, but helping Ponds up was appropriate. And let us not forget Ponds. He accepted Mulmore’s hand to help lift him up. I say, well done, young men.

Mullin and Ewing have become good friends. Born out of respect for each other, there is a strong bond of brotherhood between them. They ran into each other after the game in the hallway near the Georgetown locker room. Mullin, having suffered a tough loss to Georgetown, his team’s fifth defeat in a row; all to Big East teams and with no Big East wins this season, greeted Ewing with warmth as Ewing did the same with Mullin.

In the postgame press conference, Ewing said that when he had previously seen Mullin coaching, he noticed that Mullin was not wearing a tie, but tonight, Mullin had on a tie. Ewing likened the tie to a famous sweater.

Back in the 1984-85 season, Carnesecca, to avoid getting a cold at a game against the University of Pittsburgh, wore what many considered to be an ugly sweater. After a close win, the sweater became a good luck charm that he continued to wear.

On February 25, 1985, St. John’s; ranked No. 1 in the country, and Georgetown ranked No. 2, played each other at Madison Square Garden. In what was great theatre, and what some would call a really good psyche job, John Thompson opened wide his suit jacket before the players were introduced, and unveiled the same sweater as Coach Carnesecca. Georgetown won that night in what has since come to be known as "The Sweater Game."

Coach Carnesecca was at the game this past Tuesday evening. And before Ewing met Mullin in the hallway after the game, he ran into Carnesecca near the elevator and they embraced and exchanged warm words: