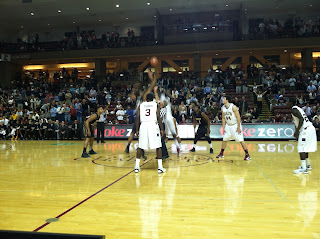 The TD Arena in Charleston is the site of St. John's next three games, starting first with host College Of Charleston Thursday night in the Charleston Classic.  (Photo courtesy of Gary Moore via The College Hardwood)

Following St. John's thrilling come-from-behind win over Detroit in yesterday's season opener, the Red Storm take an immediate step up in competition, participating in the Charleston Classic for three games this weekend, the first coming tomorrow against College Of Charleston and new coach Doug Wojcik.  In an unexpected turn of events, we received an offer over the weekend from Daly Dose friend and colleague Gary Moore to provide a scouting report of the Cougars for the Red Storm contingent who reads our content, and we instantly took him up on his intentions.  A former Hofstra writer whose vocation has relocated him to South Carolina, the Long Island-bred Moore offers his own unique content and interesting spin on the college basketball world through his own website, The College Hardwood, which can be accessed by clicking on the link.  Without any further ado...

Greetings, everyone.  I am Gary Moore from the College Hardwood.  Last Friday night I was in Charleston to watch the College of Charleston defeat Towson in the first game for both teams.  Here is a scouting report on the Cougars, the Red Storm's next opponent.

Review of the Game -

College of Charleston came out strong against Towson.  The Cougars' defense forced numerous turnovers on the Tigers and scored eighteen first half points off those turnovers.  Charleston held Towson to six of twenty six shooting in the first half and took a 40-14 halftime lead.

The second half saw Charleston extend their lead to thirty three points 49-16 with sixteen minutes left.  The Cougars' second half lead was still twenty five points with five minutes left before Charleston Head Coach Doug Wojcik emptied his bench.  Charleston cruised to a 75-58 win over Towson.

Charleston has two very solid guards in senior Andrew Lawrence and sophomore Anthony Stitt.  Lawrence, the second leading scorer from last season, is very steady.  He scored sixteen points, added seven rebounds and had five assists vs. Towson.  Lawrence is also very efficient on offense.  He only attempted only six shots and hit four of those.  Lawrence also was a perfect 6 of 6 from the line.

Stitt had a very solid game against Towson.  The sophomore had twelve points on three of four shooting from beyond the arc and added three assists with no turnovers.  Stitt scored a career high twenty three points as a freshman last season against eventual NIT Runner-Up Massachusetts.

Charleston has a very good trio of forwards in Baru, Trent Wiedeman and Anthony Thomas.  That trio combined for thirty eight points and twenty one rebounds in the win over Towson.  The trio was mostly responsible for the thirty four points the Cougars scored in the paint against the Tigers.

What impressed me most about this trio is how hard they work. Wiedeman is their go to guy as he had seventeen points on eight of thirteen shooting.  Thomas is a very athletic 6-7 forward.  But Baru impressed me the most.  He is maximum effort all the time.  An example of this was early in the second half.  Baru fought to keep a loose ball in the possession of the Cougars.  It resulted in Stitt burying a three to put Charleston up thirty three points.

The Cougars' go nine deep.  Matt Sundberg and Nori Johnson are two returning bench players who saw significant minutes last season.  They are joined this season by freshman Theo Johnson and JUCO Willis Hall.  Hall saw seventeen minutes of action and scored five points in the win over Towson.  Theo Johnson saw twelve minutes of action and had two blocks.  Nori Johnson played fourteen minutes and had one assist.   Sundberg, who nearly averaged twenty two minutes per game last season, only played two minutes against Towson, due to what seemed to be matchup issues (based on Wojcik's comments after the game).

Wojcik is a very experienced and successful head coach, having won 140 games in seven seasons at Tulsa. Prior to that, Wojcik was the Associate Head Coach at Michigan State under Tom Izzo.   Wojcik was also the point guard for the very successful David Robinson led Navy teams in the mid eighties.  The man knows his basketball.

Wojcik's team is maximum effort on defense.  The Cougars' play the passing lanes aggressively, with a lot of active hands forcing many deflected passes.   In the second half, Towson made a slight run, cutting a thirty three point lead down to twenty six with about fourteen minutes left to play.  Wojick immediately called timeout, unhappy with his team's defensive play.  Towson never really got closer than twenty five points until there was five minutes left in the game.

On offense, Wojicik's Cougars are incredibly efficient and pass the ball extremely well, looking to score the ball inside. Charleston only attempted nine three pointers and hit four of those.  As noted, they scored thirty four points in the paint and they had twenty nine free throw attempts.

If Charleston showed one weakness, it was on the offensive glass.  Towson had seventeen offensive rebounds, eight of which came from Providence transfer Bilal Dixon.  Much to his credit, Wiedeman immediately noted that in the first few seconds of the post game conference and said they had to be much better on the defensive glass against St John's.    Charleston also was only seventeen of twenty nine from the free throw line.  Many of those misses came in the second half as the Cougars were eight of ten from the charity stripe in the first half.

This is an experienced team, with four of the five starters and six of the top seven players in minutes returning from last season.  This team won nineteen games last season, including nine non conference games.

The Cougars' home, TD arena is a 5,100 seat venue.  It was eighty percent full this pastFriday night and the student sections were well filled.  In his post game press conference, Wojcik was very impressed on how the fan noise and the sound system filled the arena. I was at the TD arena for the inaugural Charleston Classic four years ago.  Charleston played Southern Illinois Edwardsville and the filled student section made a huge difference.  TD Arena can be quite loud.

I came away very impressed by the College of Charleston.  They are efficient, give maximum effort on defense and they seem to be buying into Wojcik's style of play.  As they did against the Tigers, the Cougars will likely try to jump out early on the Red Storm and get the likely capacity crowd into the game.  St John's best hope is to be smart with the ball on the offensive end, limit the turnovers and try to gain an advantage on the offensive glass.

They better bring their best effort.  With a home capacity crowd, a national TV audience with the game on ESPNU and an experienced Cougars' team, the Red Storm have a tough task ahead of them.  It will be a good game.